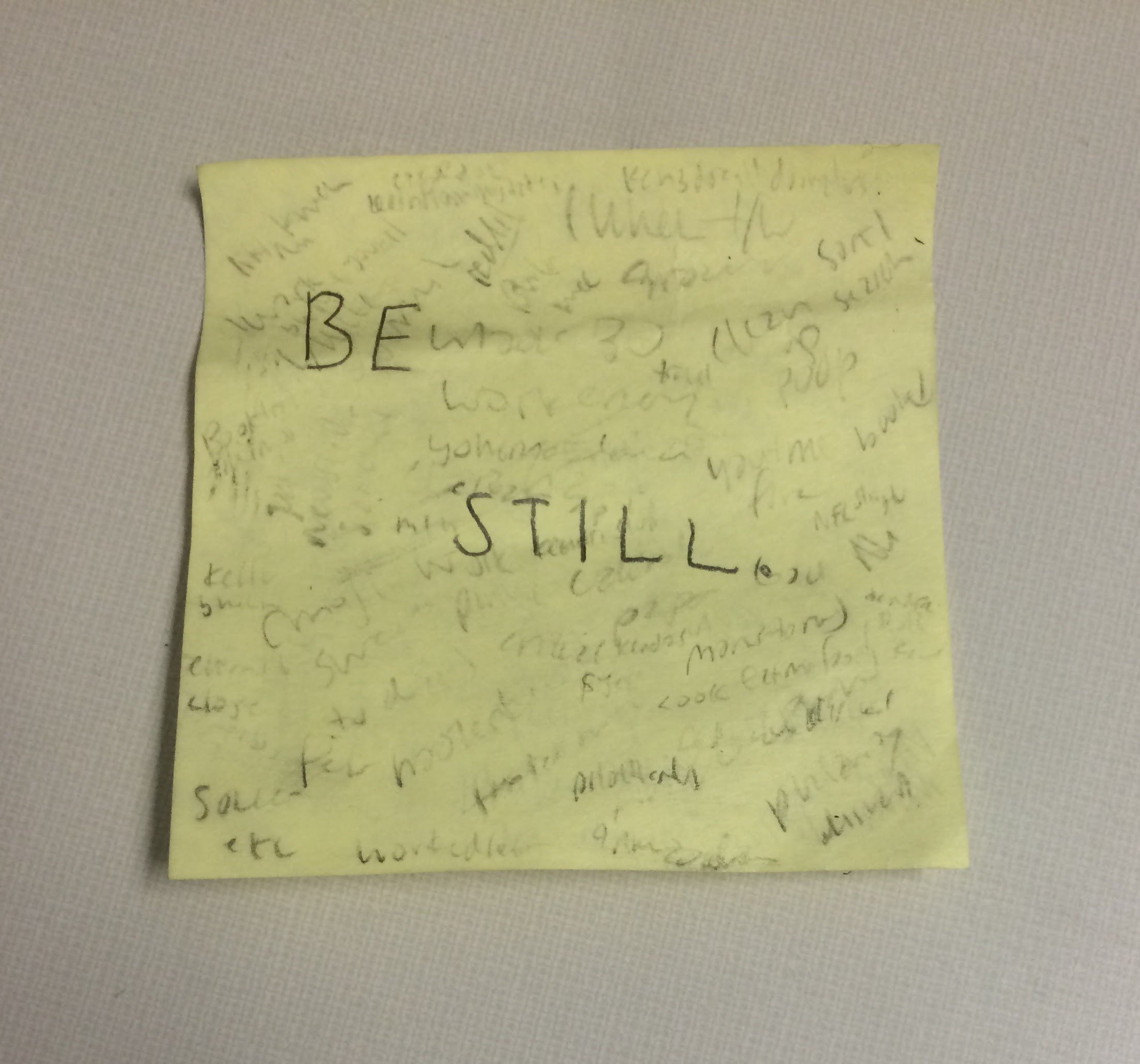 Looking back on a decade dominated by anxiety

My fear of forgetting made me write everything down. It didn’t start that way. I graduated from university having successfully navigated the structures of our education system in the USA. Everything I learned in school suggested to me that I was setup for a successful adulthood and life. What it didn’t prepare me for was existential uncertainty that comes when you leave the scripted years where you’re spoon fed education in a systematic way to mold you into a contributing member of society. I was on top of the mountain of academia, but the moment I stepped into the “real world” I was lost. I didn’t know I was lost. I had a lot of fun. I stepped into my first adult job wide eyed and bushy tailed. I made friends, I found love and got married, too. The problem was that every step in my life was accompanied by intrusive thoughts that started as a nag and became more and more overwhelming with time.

For people with OCD, these thoughts can vary. Generally speaking, they start at some point for some reason and our brains train ourselves to get them to go away by performing some action. In my particular case the intrusive thoughts were an obsessive awareness of my thoughts. I found myself spending more time sifting through my thoughts, ruminating on what may or not be important so much that the quality of my life was affected. I took notes at work to support the quality of my work. I took notes when I read things for retention. I took notes when I was on the phone, jotting down the important things. But, the more time passed, the less utility my notes offered and the more time they consumed. I continued to take notes as described, but more. I started to take notes when I was anxious because they helped me find order and finding order helped me feel good. If I were to stop increasing the velocity of my note taking at that point it might have been okay, but it didn’t stop.

With time, my broader anxiety did not change. If anything, it increased. I had all my original reasons to be anxious plus the new anxiety-inducing time-suck of sifting through my notes. Structure is good, but my notes that I was taking to reduce my anxiety weren’t written in a way that made sense organizationally. My internal monologue, my grocery list, my todo list list, my hopes, my dreams, my fears and my anxieties were all lumped together in notebooks full of notes. I couldn’t throw away the notes because there was a non-zero chance that there was something important therein. Also, I couldn’t process the notes because if I wanted to address stuff for work, I had to search for it and in the process of finding it (which was inefficient) I was inundated by triggers.

From there it only got worse. More triggers. More thoughts. More anxiety. More notes. Less control. I was at a low point in my life. It sounds unbelievable looking back, but at the time I wasn’t 100% sure that what I was struggling with was OCD. I wanted to believe that everything about me was normal. I didn’t want to admit that I had this weakness. I did my best to hide it from those around me. Whenever someone found one of my notebooks or saw me taking notes I was embarrassed.

The turning point in my life came when I started to read about my behaviors online. At the time there wasn’t really anything online about obsessive-compulsive note taking. I found the occasional article about hypergraphia and articles about certain Silicon Valley elites proclaiming it as a super power. At the end of 2017, I eventually came to believe that it was OCD. I read some online and tracked down a book by Dr. Jonathan Grayson. I immediately downloaded it to my phone and started to read it. It was a slog, and not because the book was poorly written or dense, but because every other paragraph triggered me. I persevered. I learned that OCD is not what society tells us it is.

OCD is not when you like to run a tight ship. It’s not when you like to have a tidy closet. OCD is when you have thoughts so intrusive that you are overwhelmed with anxiety that you seek immediate relief from through these compulsions, whether it be hand washing, checking, counting, writing, or anything. With time this neural loop becomes reinforced. And, as I learned, it has the capacity to spread. There comes a point where it gets so bad that the thoughts and behaviors will jump from fear of forgetting and note taking (in my case) to any and all of the other forms of OCD.

I powered through the book, one page at a time. With every page I became more educated about what I was dealing with. With every page, I pushed off finding outside help. The book ends with worksheets. I tried my best on my own to tackle this challenge. It was a valiant effort, but the place I struggled was in the accountability department. I also struggled in trying to tackle the most challenging aspects of my OCD. Eventually, after some tears I reached out to a local care provider. I didn’t know exactly what I was looking for, but I wanted a specific person (not a facility that rotates you through counselors) and I wanted someone who wasn’t just knowledgeable about OCD, but an expert. I found someone.

Change didn’t come overnight, but the stigma of finding outside help went right out the window for me. I was so happy about finding someone to help me through this and to bend an impartial ear. We started by establishing what I was struggling with and certifying that it was OCD (it was). Then we set out to identify and measure my triggers. I was handed a timesheet and the task of recognizing moments of anxiety for the next week. After I left, and time started to pass I would have an anxious moment and start the process of back tracking to understand what the trigger was (as best I could tell). When I thought I figured it out I wrote it down, how long the anxiety lasted and how bad it was using Subjective Units of Distress (SUDs) which is a scale from 1–100 of roughly how bad it was. What I discovered over the next week was that my anxiety had specific triggers. I wasn’t surprised by this, but I was surprised by how I was able to break it down to specific moments and indicators. If I’m making it sound like it was cut and dry, it wasn’t. Sometimes I would get anxious while I was already anxious. That was fine. The purpose was just to do the best I could to identify the things that set me spiraling.

I returned to my counselor after a week and he introduced me to this idea of a Fear Thermometer. Basically, we took everything I measured over the previous seven days and outlined it from least triggering to most triggering. It was illuminating. The idea after that was to start with things that were the least triggering and to move up the scale slowly and gradually. Start exposing my self to the things that cause minimal anxiety and resist the urge to take notes.

This seems like a good point to mention the fundamental tool in tackling OCD, Exposure and Response Prevention (ERP). With my counselor holding me accountable, we outlined a plan each week for me to work my way up the fear thermometer tackling things using active ERP. (Active ERP is where you intentionally trigger yourself. Passive ERP is when you are organically exposed to a trigger and you use that as a learning moment). The first thing for me to try was to try deleting articles from my saved reading list. In my particular case, fear of forgetting lended itself to accumulation. I mentioned before that I accumulated notebooks of handwritten gobbledygook. What I didn’t mentioned was that every crevice of my digital life both online and off were crawling with things I had saved for later. Seeing as how I already knew on some level that I would never get to my read-it-later article list, it seemed a perfectly suitable place to start.

Weeks past and with those weeks came weeks of highs and weeks of lows. The goal wasn’t to avoid anxiety in my life, but rather to become acquainted with it. If I could make myself function with anxiety then hopefully it would become more and more back ground noise. It wasn’t realistic to unplug from life online, to never read a book or watch a tv show. It wasn’t fulfilling to stop seeing friends, never go for a drive or live in an empty apartment clear of visual triggers. This was a fight (and I mean a fight) that I had to do. It was a fight that I wanted to do. Eventually I started seeing my counselor less. (Even this caused me anxiety because it felt like I was relinquishing control back to the OCD). He and I were making progress together in carefully targeting what plagued me. My life was slowly returning to me.

Later, we scaled back to one a month, then to once every six weeks and now, three years later, we’ve scaled back to every eight weeks. I don’t still see my counselor because I still struggle with OCD daily. I maintain the relationship because I do have bouts. I’m much more well equipped with tools to manage it now than I was before, but most of the managing is in the background. I have better recognition for what is and is not OCD and when I suspect it’s OCD I squash it.

The inflection point for me was finding myself in a dark place where my days were dominated by OCD, but stumbling across Dr. Grayson’s book. Wandering in the dark without guidance I felt so, so alone. I felt broken. The reason I’m writing this is because I want you, random person on the internet, to know that you are not alone in what you are struggling with. I struggled with it and I’ve received messages from people who feel the same. There is hope. I hope that you feel empowered to do something about it before it gets worse. Left unchecked, OCD is highly likely to get worse.

Here is a link to Dr. Grayson’s work. Good luck. Feel free to comment with your story. Let people who struggle with this know that they are not alone.

I also wrote about how I manage anxiety and uncertainty these days.